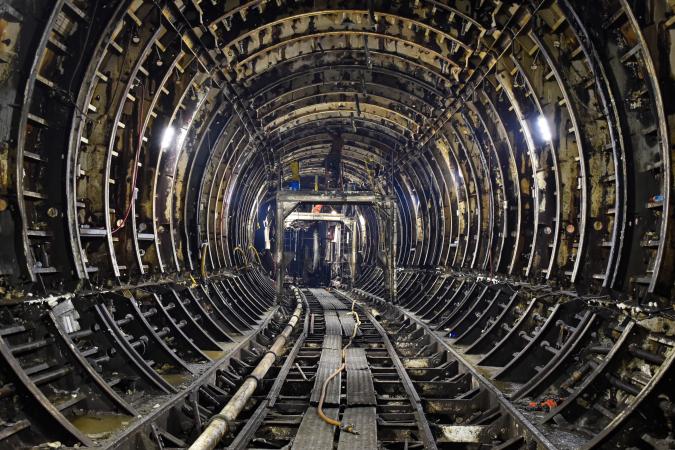 The Waterway Protection Tunnel crossed a major milestone last week on the way to becoming operational this spring.

Installation of a 12-inch concrete liner inside the 4-mile tunnel was completed February 11. It was done in short sections pouring the concrete around 30-foot-long circular metal frames that were repeatedly assembled, disassembled and moved along the way.

“It was almost like puzzle work,” project engineer Jacob Mathis said. “Concrete would be poured on Monday morning, and once it was set, that form was taken apart and moved forward. It was all about timing to keep the puzzle going.”

The Waterway Protection Tunnel runs from Grinstead Drive at Lexington Road westward to 12th and Rowan streets in the Portland area. The lining process began in September 2020 after the “Bumblebee” boring machine completed grinding a 22-foot-wide path through bedrock.

Mathis said the tunnel is expected to be operational by June 1, accepting flows of wastewater and stormwater through the snaking cylinder eighteen stories underground. Until then there’s a punch list that includes grouting the tunnel, injecting concrete to fill voids between the liner and the rock, removing any debris that might have become caught in the concrete during pouring, and repairing those spots. Surface work continues at four drop shafts connected to the tunnel.

Land around the pump station site at 12th and Rowan streets is expected to be cleared by August 1. The site will be topped with soil, grass seeded and given to Waterfront Development Corporation for the future Phase IV expansion of Waterfront Park.

The tunnel will prevent 439-million gallons of rainwater and wastewater from overflowing and polluting the Ohio River and Beargrass Creek in a typical rainfall year.

Mathis said the work has been rewarding. “Once it’s done, it will be something we can be proud of as an organization,” he said. “And there will be a sense of relief to have it done.”