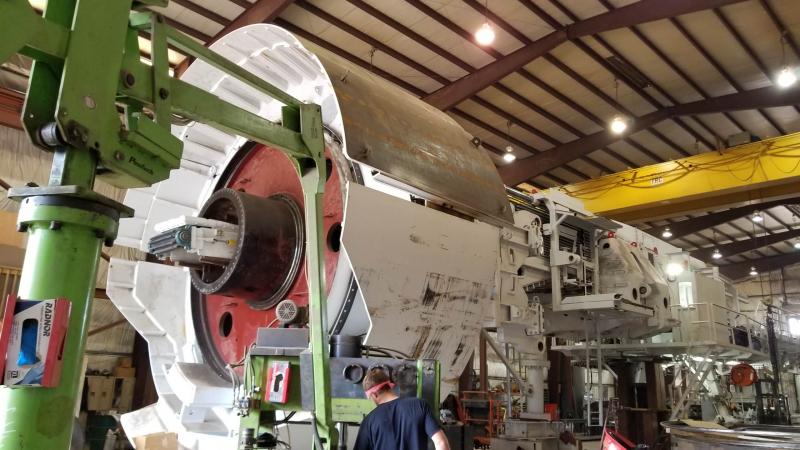 A trip to Mt. Pleasant, Pennsylvania, about an hour southeast of Pittsburgh, gave MSD Engineer and Project Manager Jacob Mathis, P.E. and Engineering-Collections System and Construction Manager Greg Powell, P.E. an opportunity to see the tunnel boring machine that will create the Waterway Protection Tunnel. Mt. Pleasant is where tunnel contractor J.F. Shea Co., Inc. operates a facility to rebuild and test tunnel boring machines prior to shipping to a project site.

The 415-foot machine was last used in a tunneling project in Milwaukee, Wisconsin approximately 10 years ago. Mathis said refurbishing the machine was similar to rebuilding an antique muscle car. “To rebuild a car, you take it apart, replace its different components, and then put it all back together. In the end, you still have the same car, but with new parts. Rebuilding a tunnel boring machine follows the same process, but on a significantly larger scale.”

Mathis said refurbishing the machine includes remanufacturing the main bearing; rebuilding electric motors; and replacing belts, hoses, wiring, and various electrical components. He added the original motors were still on the machine. The trip was his first time to see the machine that will carve the tunnel.

“The machine’s size is incredible,” he said. “It’s more than the size of a football field. It will be something to see once it is fully assembled and at work.”

Work began on the Waterway Protection Tunnel in January 2018, with the construction of the pump station, working and retrieval shafts that are required to start the excavation of the tunnel itself—which will be more than 200-feet below the surface and 20-feet in diameter. The four-mile-long tunnel will stretch from 12th and Rowan streets just west of downtown, and stretch east, generally along the Ohio River, to Butchertown, where it will turn southeast and extend to near Lexington Road and Grinstead Drive. The total storage capacity of the underground tunnel will be 55 million gallons.

The Waterway Protection Tunnel will capture 25 combined sewer overflow points that currently discharge 439 million gallons of wastewater and rainwater in a typical rainfall year that currently flow into Beargrass Creek and the Ohio River. The tunnel will allow capture of 98 percent of these overflows and store the mixtures until the rain subsides and sewer system capacity is available. The mixture will then be pumped back into the sewer system for proper treatment.