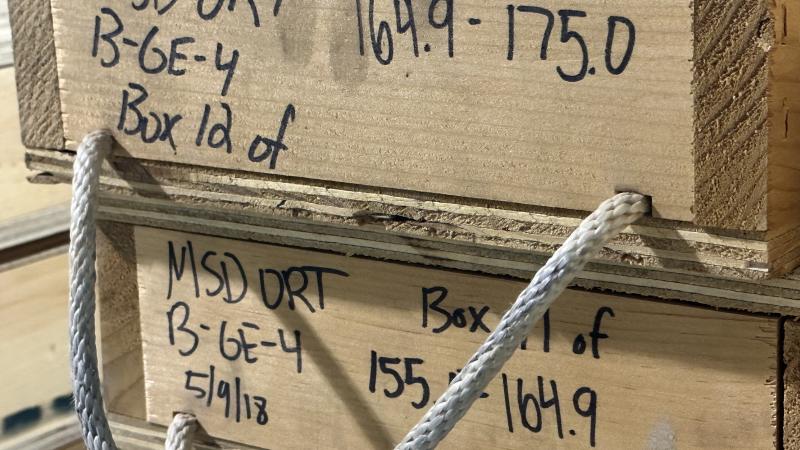 for study and educational use

LOUISVILLE, KY – MSD’s project to build a tunnel 18 stories underground for wastewater and stormwater storage also unearthed hundreds of millions of years of history. Today, representatives of the Kentucky Geological Survey’s Core Library accepted the donation of 734 feet of the area’s geological history.

The core samples are housed in 72 wooden boxes weighing approximately 55 pounds each, or two tons collectively. Fossils found in the core samples are similar to those seen at the fossil beds at the Falls of the Ohio State Park, just across the river in Clarksville.

“One key finding during sampling was notable amounts of Waldron Shale—a type of rock native to Indiana which easily fragments. This discovery determined the tunnel would have to be dug 20-feet deeper than originally planned,” states project geologist W. Todd Tharpe, Senior Engineering Geologist with Black & Veatch.

State Geologist, Director of the Kentucky Geological Survey and Research Professor of Earth & Environmental Sciences at the University of Kentucky Dr. William C. Haneberg, says “One of our most important jobs at the Kentucky Geological Survey is to maintain publicly available archives of samples and data that help us understand the ground below. That information is vital for infrastructure projects like the MSD waterway protection tunnel as well as underground carbon storage evaluation, orphan oil and gas well mitigation, natural hazard and water resource assessments, and exploration for the critical minerals and rare earth elements we will need for the energy transition. The core samples we’re accepting today will improve our knowledge of sedimentary rocks deposited during the Silurian and Devonian periods about 400 million years ago, and which are literally the foundation of Louisville.”

Construction of the Waterway Protection Tunnel began deep underground in 2018 at the 12th and Rowan site. It progressed to the east more than 200 feet below ground, underneath downtown and the Butchertown area, where it veered slightly to the south on its way beneath Lexington Road to its terminus near Grinstead Drive. A tunnel-boring machine longer than a football field dug the 22-foot wide, four-mile-long tunnel.

As part of the preparation for this $220 million project, geologists drilled down more than 200 feet along the path of the tunnel to pull up samples of limestone, dolomite and shale and then analyzed the rock as part of planning for the depth of the tunnel.

MSD has thousands of linear feet of these rock core samples stored in a southern Indiana warehouse. They acted as a library for contractors to access during the construction process. The samples highlight the history of what is now Louisville; each is unique and contains many fossils.

During the tunnel excavation process, crews carted more than 625,000 tons of excavated rock via a horizontal conveyor belt back through the tunnel to the 11th and Rowan site, where it transitioned to a vertical conveyor belt to be brought to the surface, loaded onto trucks, and taken away. Once excavation was complete, crews lined the entire length and circumference of the tunnel with 12-inches of solid concrete to prepare it to store stormwater and wastewater during heavy rains.

Despite the months-long drought the area is experiencing, the Waterway Protection Tunnel has been hard at work capturing excess sewage and stormwater and storing it until system capacity is available. The tunnel has captured 89,570,000 gallons of what would have been sewer overflow since its operation in June 2022.

Facts about the core sampling:

Sampling just east of Louisville Slugger Field found an semi-artesian well – a pocket of deep underground water. This water was three times saltier than seawater, due to the length of time the water was pressurized underground.