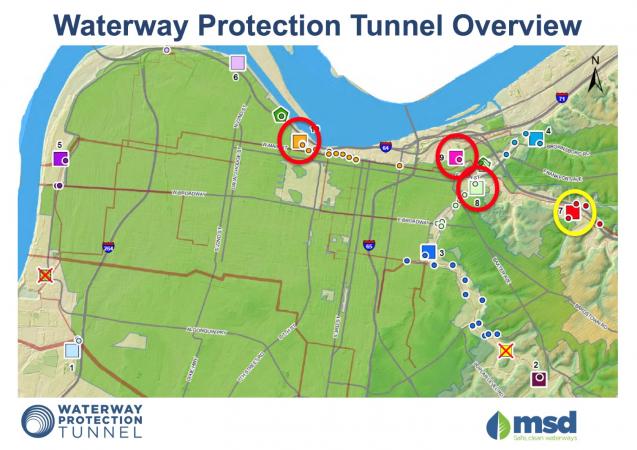 MSD held a Public Outreach Meeting August 28th to share an update on the 1.5 mile extension of the Waterway Protection Tunnel and the elimination of the I-64 & Grinstead CSO Basin. Area residents were given the opportunity to ask questions about the extension and the project in general. Questions from residents ranged from “Will we still be getting upgrades to the park and green space?” (yes), to “What will you do with all the rock you excavate from the tunnel?” (the rock will be conveyed underground to the working shaft site at 13th and Rowan then transported to a rock quarry for disposal.)

If you were unable to attend meeting, here is a summary of the update: 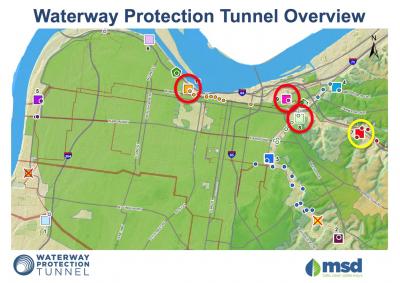 We were pleased to have Louisville Metro Councilman, District 9, Bill Hollander, join us for the meeting. Councilman Hollander was able to help answer some of the questions from residents and had this to share about the project:

“The conversion of the project from a basin to a tunnel shaft will minimize disruption on the surface and save money in the long run. I am very happy that the trailhead for the Beargrass Creek Greenway remains part of the project. At the end of the day we’ll end up with a cleaner creek and a better trail.”

After the meeting MSD received this note from one of the attendees:

I was one of the people asking you questions after the session this evening, and just wanted to thank you and your staff for a forthright and honest presentation.

Also, I want to applaud you and MSD for having the courage to change directions and go for a better idea, even after the public was made aware of the first plan. I'm sure in some ways it would have been easier to stick with the original plan than change and have to explain everything again, but I really appreciate MSD making the right decision for the long run instead of doing that.

Thank you to everyone who attended the meeting. For more information about the Waterway Protection Tunnel Project please visit louisvillemsd.org/tunnel.