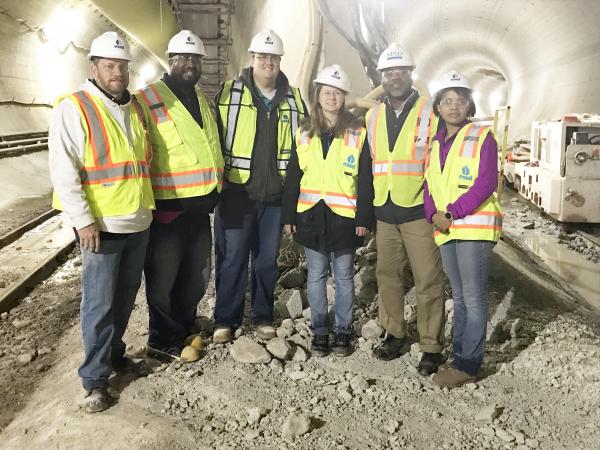 When Michael Fitzner’s suggestion of “Bumblebee” won the contest in 2018 to name the machine boring MSD’s four-mile long Waterway Protection Tunnel, he was awarded a chance to go into the tunnel with five coworkers. On December 5, Fitzner, with Latoya English, Adonis Henderson, Patrick Meador, Cemal Mitchell and Kayla Sheckell, loaded into a large metal cage and were lowered 220 feet down the working shaft into the tunnel via a crane.

The speed of the descent surprised English. “It goes down a lot faster than I expected,” she said. “I expected it to be really dark, but there was plenty of light along the way, so you were never really in total darkness.”

At the bottom of the shaft, everyone was loaded aboard the “man trip”—a small train that takes tunnel workers to their job sites each day. The 1.5-mile ride along the path carved by Bumblebee opened their eyes to the scale of the project.

“It felt huge already, but then everything became real,” Mitchell said. “We were traveling on the train, and at some point, they said we were underneath the Ohio River, which was just crazy to imagine.”

Fitzner said photos and articles about the tunnel didn’t do it justice. “I can’t dig a hole in my back yard, and they were down there boring out a four-mile-long tunnel.”

They said the visit gave them the chance to connect with something quite different from the paperwork they see every day in the finance and revenue division.

“When you see the payouts, it’s hard to imagine how you budget for something this big,” Mitchell said. “But this let us see how the money is spent, and how these different pieces fit together.”

The employees spoke with tunnel crew members who explained how Bumblebee, named by Fitzner to honor Louisville native Muhammed Ali, uses the cutter head to push through rock 24 hours a day. It requires additional infrastructure ranging from lights, to a miles-long conveyor belt system that removes rock, to ventilation systems that pipe in air and remove dust.

And there were surprises—like ankle-deep mudholes.

“I was regretting my shoe choice when I stepped in that,” Sheckell said.

They got the opportunity to walk around inside Bumblebee. The massive machine was on a maintenance shutdown during the visit.

“The size of Bumblebee was impressive, but the simplicity of what it does is pretty straight-forward,” Meador said. “There’s a strong sense of pride on display by MSD workers and contractors on site.”

Pride extended to the employees visiting the site.

It was the culmination of a year-long wait for Fitzner, a chance to see the tangible results of what he sees on spreadsheets. “It lets me see how my work goes into helping their work. But the best part was being able to sit in the driver’s seat of the boring machine, and say ‘I named this thing,’” Fitzner said.