Rock rollin’ out as work on tunnel continues 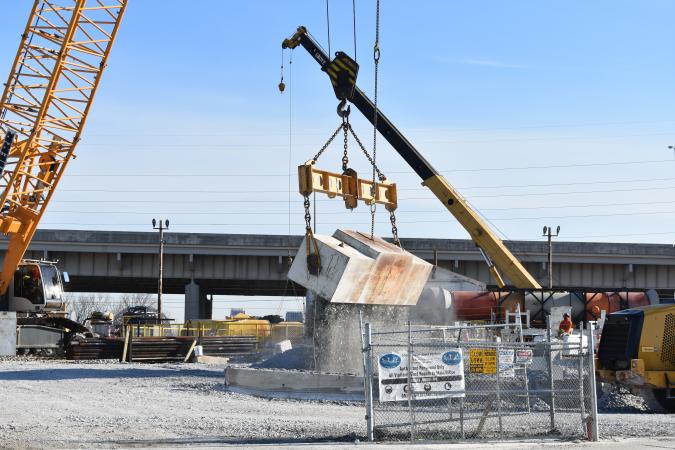 So here’s the scoop of “Bumblebee” …

“Scoop” doesn’t quite do it justice, however, for the work underway at the Waterway Protection Tunnel, as “Bumblebee,” the project’s tunnel boring machine, continues to carve its way through bedrock to create the four-mile tunnel.

Project Manager Jacob Mathis said the tunnel boring machine is currently under the Ohio River near 10th Street. “Each time the boring machine pushes forward six feet, it loosens 40 tons of rock,” Mathis said. The rock fills “muck cars” pulled along locomotive tracks behind the boring machine to the shaft near 12th and Rowan streets. A crane on the surface then lifts muck cars filled with rock from the tunnel through that 48-feet diameter vertical shaft. Once the muck cars are empty, the crane lowers them back into the tunnel to repeat the process. Recently, crews installed a second set of locomotive tracks and muck cars to speed up the work. The excavated rock is loaded into dump trucks and transported to a local quarry.

Nicknamed “Bumblebee” in honor of Muhammad Ali, the 412-foot-long machine will ultimately bore a four-mile-long tunnel to store combined stormwater and wastewater to prevent it from overflowing sewers and polluting our river and streams. Over the next several months, the machine will continue east, moving deep under the river along the shore with downtown Louisville to Butchertown, then turning southeast and advancing to near Lexington Road and Grinstead Drive.

After excavation is complete, the entire length of the tunnel is lined in concrete, making it watertight. The Waterway Protection Tunnel will store up to 55 million gallons of combined wastewater and stormwater during periods of heavy rain until capacity is available in the MSD sewer system. The contents are then pumped back into the system, conveyed to MSD’s Morris Forman Water Quality Treatment Center for proper treatment and release into the Ohio River. The tunnel is slated to be operational by the end of 2020.