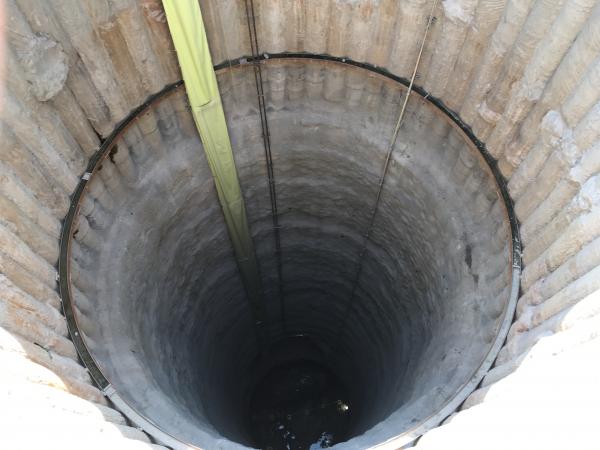 MSD contractors working to build a massive underground tunnel to prevent wastewater and stormwater from overflowing and entering the Ohio River and Beargrass Creek have reached a significant milestone. The “working” and pump station shafts — which will carry workers and equipment underground — have reached their full depth of 220 feet below the surface.

Horizontal drilling and blasting to connect the two shafts is underway — allowing space for the underground assembly of the tunnel boring machine that will arrive in Louisville this fall. From that point — 18 stories underground — the boring machine will carve MSD’s Waterway Protection Tunnel out of the rock. The tunnel will begin at the working shaft site at 12th and Rowan streets just west of downtown, run east under parts of the Ohio River and downtown, then turn southeast near Butchertown and extend to near Lexington Road and Grinstead Drive.

The tunnel is designed to store stormwater and wastewater that otherwise would overflow and pollute local waterways when it rains. The tunnel stores the mixture until the rain subsides and sewer system capacity is available. Then the wastewater and stormwater is pumped back into the sewer system and conveyed to MSD’s Morris Forman Water Quality Treatment Center, where it is treated before being released into the Ohio River. In total, the Waterway Protection Tunnel can store 54.5 million gallons of wastewater and stormwater.

“This is an important milestone in MSD’s mission to provide safe, clean waterways for the community,” said MSD Executive Director Tony Parrott. “Now that we’ve reached the full depth, we’re beginning to prepare the shaft for the tunnel boring machine to begin excavating the length of the tunnel.”

Over the next several weeks, crews will continue to blast a horizontal tunnel space between the two shafts to prepare space for assembly of the boring machine, which is 415 feet in length, and a rock-cutting head more than 20 feet in diameter. The machine was recently was used for a tunnel project in Milwaukee, Wisconsin, and is currently in Pennsylvania being outfitted for MSD’s Waterway Protection Tunnel job. It will arrive in Louisville in September on more workers will assemble it piece by piece underground.

It will take nearly three-years to carve the four-mile tunnel and complete the connections. The tunnel is an innovative solution to Louisville’s challenge of combined sewer overflows during periods of heavy rain. The tunnel replaces the four large storage basin projects that were initially planned for areas along the tunnel route – and it provides greater storage capacity and lower long-term operations and maintenance costs compared to the basins.

When the Waterway Protection Tunnel project is operational at the end of 2020, the job sites at both the beginning and finishing points of the tunnel will become new public green spaces. Waterfront Development Corporation will use the location of the working and pump station shafts near 12th and Rowan streets for a western expansion of Waterfront Park.

The “retrieval shaft” — near Lexington Road and Grinstead Drive — where the tunnel boring machine will be removed when the tunnel boring is complete will also become a new public green space and trailhead for the Beargrass Creek Trail, complete with parking, paths, a rain garden, and a wetland preservation area.