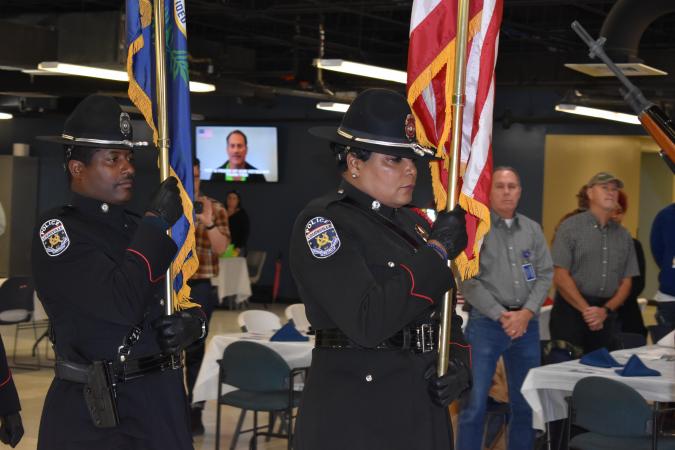 Louisville MSD and Louisville Water Company took the opportunity on Friday, Nov. 9, to honor their employees who have given and continue to give to their country through service in the armed forces.

Gant thanked MSD and Louisville Water for their efforts to employ veterans. “You understand how hard-working and motivated our veterans are, as well as their proven ability to learn and the value they continue to offer our great nation, even after they are out of uniform,” she said.

Mooney spoke of his service, joining the Navy 75 years ago, as a 17-year-old, becoming a Gunner in the Pacific. “There were some good times, and quite a few bad times, as well,” he said. He also mentioned participating in an Honor Flight, which flies veterans to Washington, D.C. to visit their respective memorials. “There were 34 of us. One gentleman was 101,” he said. “I was the baby of the bunch; I’m only 92.”

Mayor Greg Fischer spoke briefly during the event, noting the value of teamwork, and how military service both develops and demands cooperative efforts. “Veterans understand teamwork,” he said. “It’s why it’s essential we stop and say ‘thank you’ every year to our veterans.”

The Fern Creek High School Marine Corps Drill Team—The “Lady Leathernecks”—performed a rifle drill show outside of the facility that was met by impressed applause.

Afterward, MSD and Louisville Water employees participated in the Veterans Day Parade down Jefferson Street. The event marked the centennial anniversary of the end of World War II and the founding of Fort Knox.