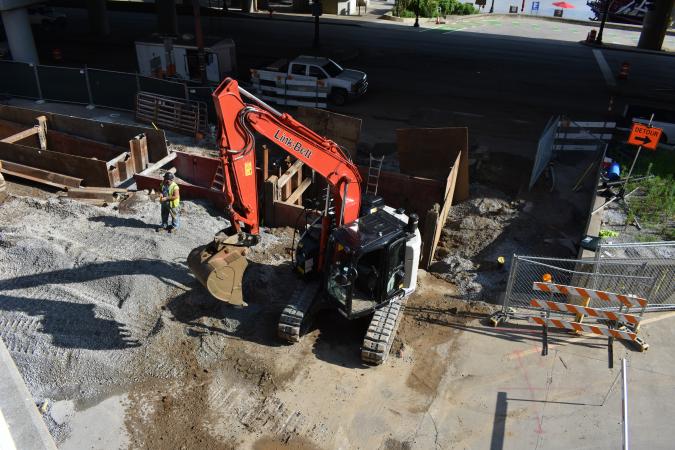 Video and laser inspections earlier this year revealed structural damage to a section of the 60-year-old pipe underneath West Main Street between 4th and 7th streets. The damaged sewer pipe is one of the city’s largest, carrying approximately 40 percent of Louisville’s wastewater flow. Known as the Ohio River Interceptor, the pipe carries wastewater to MSD’s Morris Forman Water Quality Treatment Center so that it can be treated before being released into the river.

“A different section of this same pipe has caved-in before due to age and wear,” said MSD Executive Director Tony Parrott, referring to the August 2017 collapse at Main and Hancock streets that took six weeks to repair.

“We must address the safety and health hazard of this crucial sewer line and do it in a way that minimizes disruption to this vibrant downtown area.”

The $20 million repair project involves MSD building a temporary “pump-around” system to remove wastewater flow from the damaged section of pipe, so that workers can go underground and make repairs from within the 7-foot wide pipe. Workers will enter the pipe through small existing hatches in the pavement at 4th and Main streets.

The interior of the pipe will be lined with corrosion-resistant PVC panels fit together by hand and sealed to the unique shape of the pipe itself – essentially creating a sturdy new pipe inside the damaged pipe. This will eliminate the need to close and excavate Main Street. There will be some detours and lane reductions to accommodate the repair and the pump-around for the wastewater.

•  From June 18 to mid-July, a section of 4th Street just south of River Road will be closed to allow for the construction of a temporary pump station to move wastewater out of the damaged portion of the Ohio River Interceptor. Drivers can use 3rd, 6th, or 7th streets to connect to and from River Road, which remains open.

•  From July 9 through the project’s completion, there will be lane reductions and traffic flow changes at the intersections of 4th and Main streets and 4th Street and River Road in order to provide space for contractors to safely complete the work, while maintaining vehicle and pedestrian traffic. One lane of Ninth Street — the drop-off lane — will also close between Main and West Washington streets, while a section of West Washington closes at Ninth street. Construction is anticipated through November.

• Parking lanes on the south side of Main Street between 4th and 7th streets remain closed to protect the public through the project’s completion at this time. These lanes have been closed since March to allow MSD crews to continually monitor the pavement for signs of cave-in and will allow space for MSD to safely complete the repair. As the repair progresses, these parking lanes will be reopened to traffic.

• There may be other minor lane reductions throughout the project area conducted during the overnight hours to minimize traffic and pedestrian disruption. Wastewater pumped out of the damaged pipe will be temporarily re-routed west along River Road to 9th Street where it will rejoin the Ohio River Interceptor pipe and continue its path to the water treatment center.

Following the prior cave-in of the Ohio River Interceptor at Main and Hancock streets, MSD conducted extensive video and laser inspections of the pipe, to allow engineers to analyze the pipe without having to empty it. The inspection revealed that some of the concrete and rebar in the 4th to 7th street section had worn away due to corrosion caused by sewer gases, reducing the structural integrity of the pipe.

The Ohio River Interceptor runs under Main Street from the Butchertown area in the east to I-264 in the west, it then turns southwest to MSD’s Morris Forman Water Quality Treatment Center. The pipe ranges in size from 60- to 186-inches in diameter and is approximately 25-feet deep. It was constructed of concrete with two layers of rebar in the 1950s.

MSD maintains more than 3,300 MSD miles of sewer lines – enough to stretch from California to Maine, and many dating back 75 years or more. In the past 12 months, MSD has responded to more than 1,100 cave-ins across the community, including recent collapses of a stone sewer at 2nd and Main streets and a brick sewer at Liberty Street between East Chestnut and Baxter Avenue, both more than 150 years old. To view a map of cave-ins over the past year, visit: LouisvilleMSD.org/prevent-collapsing-sewers.