The high cost of ‘flushable’ wipes 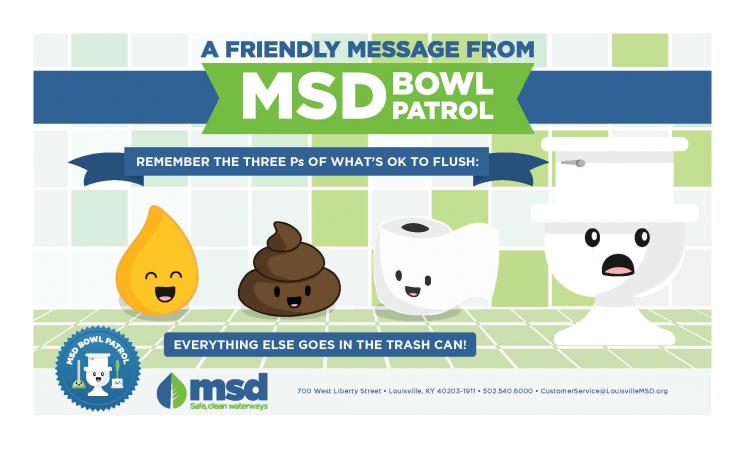 MSD’s “Bowl Patrol” campaign offers a light-hearted approach to the issue of what to and what not to flush (hint: only “the three Ps” = pee, poo and toilet paper). Though the campaign uses humor to convey its message, the ramification of split-second bathroom decisions plays out in large—and frequently expensive—ways for Louisville MSD.

“Advertisers might call them ‘flushable,’ but only because they will typically make it past your toilet,” he said. “They don’t break down and, once they are in the system, it doesn’t take much for them to cause damage.”

That damage is costly. The wipes clog machinery or build up in wet wells. The results range from hiring Vactor truck operators to clean out well wells to repairing broken pumps to sewer discharges and environmental fines.

“Syringes have become more prevalent than ever, and those add extra risk when you try to remove them from the system,” he said.

So while the tone of the “Bowl Patrol” might be light, it is intended to combat a severe problem. Rottet said he hopes people understand the consequences of flushing things that, frankly, shouldn’t be flushed.

“What you flush doesn’t just disappear,” he said. “The only things that should go down a toilet are pee, poo and toilet paper.”