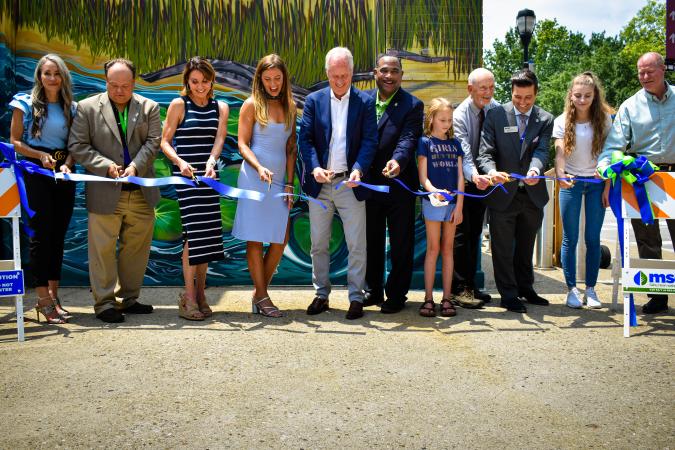 Louisville MSD has converted a key downtown corner to a visual oasis with the completion of a new building-sized mural.

What was once a drab and nondescript mechanical building at a busy downtown intersection – Fourth and Main streets – is now a lively and dimensional artist’s representation of flowing local waterways. Entitled “Hope Springs – The Wishing Well” by local artist Whitney Olsen, the four-sided, full-building mural and sculpture has transformed MSD’s Fourth Street Flood Pump Station into a celebration of nature amid its concrete neighbors.

Adorning the pump station with rivers, waterfalls, fish, turtles, and more, the mural signifies MSD’s important role in the community – to provide safe, clean waterways for all area residents.

The improvement to the downtown pump station comes as an additional benefit of MSD’s Waterway Protection Tunnel – which was completed and put into operation in June. The four-mile tunnel, 18 stories below ground, running from 12th and Rowan to Grinstead Drive and Lexington Road, will store a mixture of stormwater and wastewater during periods of heavy rain, preventing it from combining with sewage and overflowing into the Ohio River and Beargrass Creek.

“The completion of one of our city’s largest, and most important public infrastructure projects will provide great benefits to our community – both in the infrastructure itself and the visual glory that now adorns the exterior of our Fourth Street Pump Station,” said MSD Executive Director Tony Parrott.

MSD determined it would build the Waterway Protection Tunnel as opposed to four planned storage basins in part to reduce the significant multi-year construction disruptions throughout the downtown, NuLu and Butchertown areas, the community’s hub for commerce, tourism, and entertainment.

“Our facilities are crucial to maintaining the health and safety of our area waterways. When it was time to make necessary maintenance upgrades, rather than go back with the same old white that made this structure look very industrial, we thought, let’s further honor that commitment to downtown and do something that can create a community asset,” Parrott said.

Artist Whitney Olsen partnered with Louisville creative agency Bandy Carroll Hellige Advertising + Public Relations on the mural project. She stated, “I remember gazing out the window at my production glass job daydreaming about murals and how I wanted to add sculptures, glass, and glitter to buildings. This project fulfilled a year’s-long dream of mine, and I’m just getting started.”

The two pipes on the top of the structure are painted and adorned with shimmering mirrors to look like a waterfall and represent the Falls of the Ohio. The full-building mural includes 3-D aspects that focus on light and how the building looks at different parts of the day. The mosaic represents rippling water that brightens and brings life to the surrounding area.