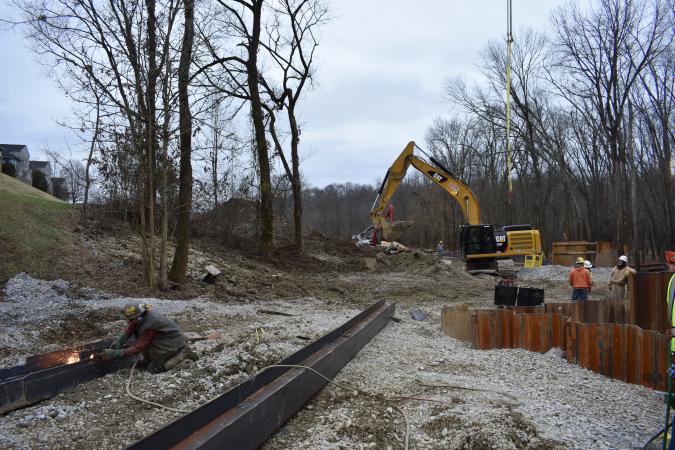 MSD contractors have finally been able to reach the bottom of the 35-feet deep repair shaft next to Harrods Creek in Prospect. Mobile cameras inserted into the pipe revealed the damage is significantly worse than expected. Both pipes under the creek have significant breaks.

The repair project is more comprehensive than initially thought, involving discussions with state and other regulatory agencies, and other utilities. Repair plans are contingent on dialogue with these agencies. MSD customers will continue to have no interruption of their sewer service.

“This is a complicated and long repair, and right now, we are focused on maintaining a safe site, and identifying the best way to repair these two pipes. In the meantime, we will thoroughly investigate all aspects of the planning, design, and construction of the original project—installed in 2013—to determine what caused the failure of the two pipes,” states MSD Executive Director Tony Parrott.

There have been many challenges with this repair—the depth of the pipe at 35-feet, the proximity of Harrods Creek, flooding of the Ohio River, and saturated soils. Despite these conditions, MSD stopped the overflow of sewage into Harrods Creek, except for the first days with 1,050,000 gallons of sewer water entering the stream.

We have open and transparent communication with all regulatory agencies. We will update the neighbors and the public as soon as the plans are finalized.

The break is in a section of the 30-inch force main that runs near and 35-feet under Harrods Creek behind Harrods Run Road and Timber Creek Court.

MSD stopped the overflow of sewage into Harrods Creek, but not before 1,050,000 gallons of sewer water entered the stream. All regulatory agencies were notified. The public should continue to avoid contact with the creek from the Harrods Run Road area to the Ohio River.