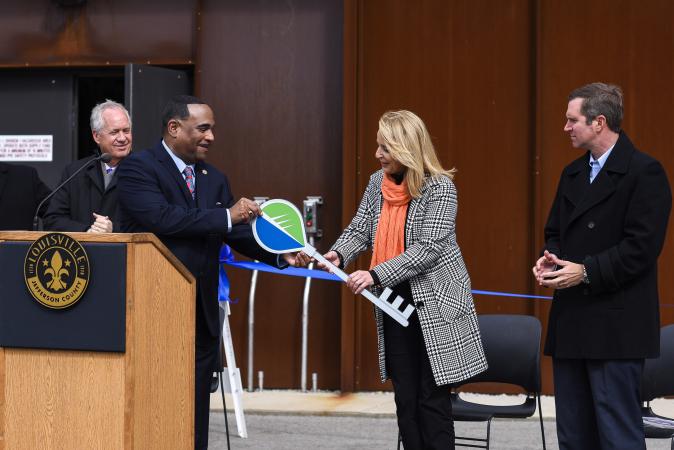 ‘From a worksite to a play site’

MSD celebrates the 50th anniversary of the Clean Water Act

—Land given to Waterfront Park for park expansion—

LOUISVILLE, KY –Today, on the 50th anniversary of the passage of the federal Clean Water Act of 1972, MSD cut the ribbon on the massive underground Waterway Protection Tunnel and ceremonially handed off to Waterfront Park ownership of the nearly 5-acre tunnel site at 12th and Rowan streets on the western edge of downtown.

What had been the primary construction site where workers, trucks, cranes and excavators based their efforts to build a massive underground stormwater storage tunnel will now be repurposed to enable Waterfront Park’s much-awaited westward expansion.

“MSD is so pleased to partner with Waterfront Park to take this property from a worksite to a play site for the entire community to enjoy,” said MSD Executive Director Tony Parrott. “During the tunnel construction, I often referred to it as the most important construction project that Louisville residents may never see. However, now that the tunnel is operational, not only will the community reap the benefits of preventing sewer overflows, but also an expanded Waterfront Park, which will bring all parts of our community together and connect all with the Ohio River in a beautiful way. Safe, clean waterways for all is what the Clean Water Act is all about.”

For the past four years, the site had served as the primary construction and staging area for MSD’s Waterway Protection Tunnel – a four-mile tunnel built more than 18 stories beneath Louisville. The tunnel is a crucial piece of MSD’s federal consent decree work to protect our local waterways. The $221 million project helps prevent sewer overflows from polluting the Ohio River and Beargrass Creek during heavy rain and can store up to 55 million gallons of stormwater and wastewater per rain cycle and reduce sewer overflows by approximately 500 million gallons annually.

Before the Waterway Protection Tunnel and other MSD Consent Decree projects, heavy rains often resulted in combined sewer overflows – where the volume of rainwater exceeds the sewer system capacity, combines with wastewater, and overflows into the Ohio River and other area streams. Now, the tunnel and a network of storage basins and pipes combine to store nearly 180 million gallons, holding it until the rains subside and capacity is available in the sewer system. Then pumps send the contents through the sewer system to MSD’s Morris Forman Water Quality Treatment Center, where it is treated and released back to the Ohio River.

“It’s only fitting that the completion of the Waterway Protection Tunnel and the generous donation of land to grow Waterfront Park is happening today, on the 50th anniversary of the enactment of the Clean Water Act,” said Congressman John Yarmuth. “This monumental project will not only help preserve the Ohio River and Beargrass Creek, but it will also expand Waterfront Park further west so that it can be enjoyed by even more Louisvillians year-round. I thank Louisville MSD for their dedicated work in making this project a reality and helping ensure that our waterways are protected for generations to come.”

“For years my family called Louisville home, so I personally know the significance of this ribbon cutting and the important role the Waterway Protection Tunnel will play in ensuring families have access to clean, safe water – a basic human right,” said Gov. Beshear. “I am proud to see the steps being taken today to make this city an even healthier place to live. From providing clean water to transferring more land to the Waterfront Park expansion so that more families can have access, Louisville is making progress for Kentuckians and visitors alike.”

“I was pleased to see the legislature affirm the Governor’s plans to set $10 million aside in last year’s budget to expand Waterfront Park. MSD has been an exceptional partner with the Louisville community. Their generous donation of this land will be a great addition to the already-expanding waterfront park in west Louisville,” states Kentucky State Senator Morgan McGarvey.

“Waterfront Park—our front yard, our communal living room—will extend along an Ohio River that is cleaner because of this wastewater tunnel. This westward expansion, and conversion of the tunnel work area to a Waterfront Park recreation area, will strengthen the connection among our neighborhoods by being part of more of our neighborhoods, giving more of our people even more space to come together, take a walk, ride a bike, play at a park…closer to home,” Mayor Greg Fischer.

The 22-acre park expansion between 10th and 14th streets will connect downtown and West Louisville along the waterfront. This new phase will provide additional open space along the river, increasing opportunities for new outdoor experiences and activities. The MSD parcel is envisioned to include a key feature of the park expansion, including a unique outdoor experiential learning area for children that has been designed in partnership with the Kentucky Science Center.

“What an amazing partnership this is,” said Deborah Bilitski, president and executive director of Waterfront Park. “Below ground MSD will be working hard to protect our community, while above ground the community will be enjoying the world-class amenities at Waterfront Park Phase IV.”

Construction of the Waterway Protection Tunnel began in 2018 at the 12th and Rowan site. It progressed to the east more than 200 feet below ground, underneath downtown and the Butchertown area, where it veered slightly to the south on its way beneath Lexington Road to its terminus near Grinstead Drive. A tunnel-boring machine longer than a football field dug the 22-foot wide, four-mile-long tunnel. Along the way, crews carted more than 625,000 tons of excavated rock via a horizontal conveyor belt back through the tunnel to the 11th and Rowan site, where it transitioned to a vertical conveyor belt to be brought to the surface, loaded onto trucks, and taken away. Once excavation was complete, crews lined the entire length and circumference of the tunnel with 12-inches of solid concrete to prepare it to store stormwater and wastewater during heavy rains.

Despite the drought the area is experiencing, the Waterway Protection Tunnel has been hard at work capturing excess sewage and stormwater and storing it until system capacity is available. The tunnel has captured 89,570,000 gallons of what would have been sewer overflow since its operation in June 2022.