The Cedar Creek Water Quality Treatment Center (CCWQTC) was originally designed as a 2.5 million gallons per day (MGD) facility.  The treatment facility was constructed in 1995 to provide sanitary sewer service to the Cedar Creek Watershed.  With the construction of this plant, many of the existing neighborhood package treatment plants that had a history of operational problems, were eliminated. The CCWQTC has played an important role in improving the water quality of the area by allowing for the regional treatment of wastewater. 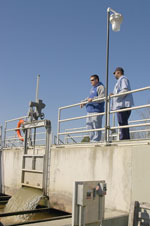 MSD’s Cedar Creek Action Plan (CCAP) contained the recommendation in 2000 to accelerate the expansion program from Phase 1 to the projected Phase 3 and construct a 7.5 MGD average design capacity.  The second/third phase was under construction by June 2001 and completed by June 2003. 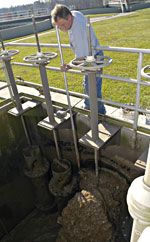 Currently, the raw wastewater is pumped by the influent pump station to the Preliminary Treatment Building where it is screened by one of four mechanically-cleaned bar screens.  Wastewater then flows by gravity to one of two grit collectors to remove the finer material such as sand, gravel and egg shells.  The wastewater then flows by gravity to one of two oxidation ditches to receive secondary treatment.  The raw wastewater mixes with return activated sludge in each oxidation ditch to create a mixed liquor where microorganisms treat the wastewater.  Following the oxidation ditch, the mixed liquor flows to one of four secondary clarifiers for separation.  In the clarifiers, the clarified water passes over the weirs and is separated from the biosolids which settle to the bottom of each clarifier.  The clarified water is then filtered using one of five tertiary filters to remove the fine solids, followed by disinfection using ultraviolet lights, and then the dissolved oxygen is increased by flowing down the reaeration ladder.  The plant effluent is then discharged to Cedar Creek.  The biosolids are pumped from the bottom of each clarifier and either returned to one of the oxidation ditches or pumped to one of the sludge holding tanks.  The wasted biosolids are stored in the tanks and transported to MSD’s Morris Forman Water Quality Treatment Center for incorporation into the production of Louisville Green.

Design flows for the CCWQTC are as follows:

Design influent characteristics are as follows: (mg/L = milligram per liter)

Discharges from the facility are limited under KPDES Permit No. KY0098540. Limitations on effluent water are shown on the chart below.