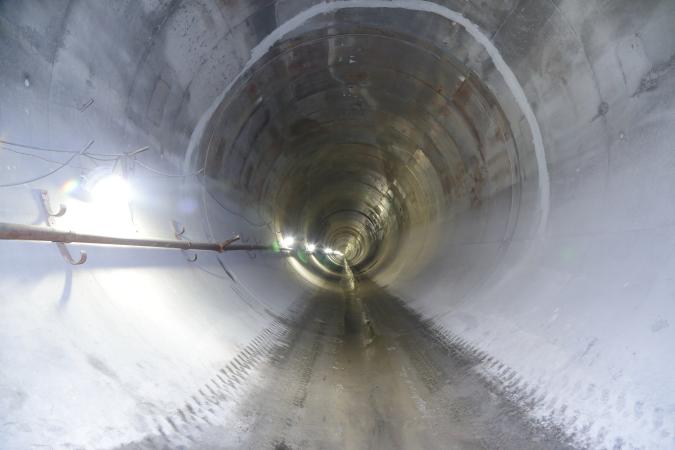 Until recently, a good steady or heavy rain may have resulted in a sewer overflow – where the volume of rainwater exceeds the sewer system capacity, combines with wastewater and overflows into the Ohio River and other area streams. But, now, MSD’s recently completed Waterway Protection Tunnel is operational, ready to store upwards of 55 million gallons of stormwater and wastewater and prevent such overflows.

“The Waterway Protection Tunnel has been MSD’s largest capital improvement project over the past couple of years and will yield tremendous benefits to the community,” said MSD Executive Director Tony Parrott. “While it is well underground and our customers will likely never see it, the tunnel will be at work every day, preventing sewer overflows and protecting Louisville’s health and safety.”

The Waterway Protection Tunnel sits 18 stories underground and stretches four miles from 11th and Rowan streets to Grinstead Drive and Lexington Road. Work on the more than $221 million project began in 2018. It progressed in phases, from building the drop shafts, pump station and connection points, to excavating 625,000 tons of rock to make way for the 20-foot-wide tunnel and ultimately lining the entire length of the tunnel with 12-inches of solid concrete.

Previously, in a typical rainfall year, an average of 439 million gallons of combined rainwater and wastewater would overflow – polluting area waterways, harming wildlife and plants, and creating the risk of exposing people to harmful bacteria and pathogens. The Waterway Protection Tunnel, along with a series of storage basins MSD completed over the past few years, now captures the vast majority of overflows, storing the combined rainwater and wastewater until the rain subsides and sewer system capacity is available. MSD then pumps the mixture back into the sewer system and conveys it via underground pipes to its water quality treatment centers, where it is treated before release into the river or area waterways.

Waterway Protection Tunnel by the numbers

200 feet below the surface

10 pumps that each can move 5 million gallons per day