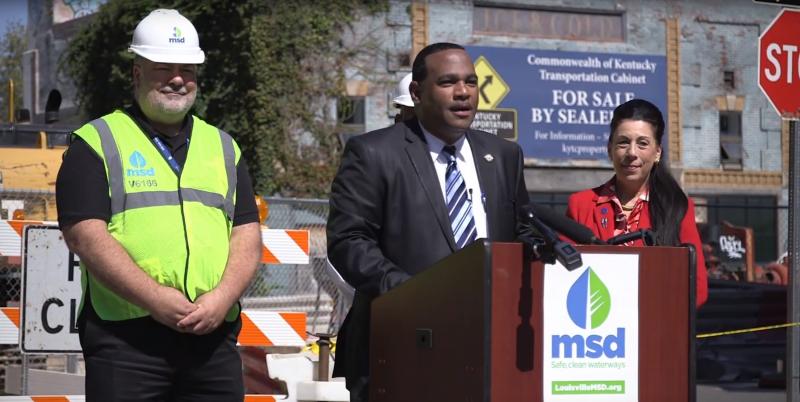 Temporary sewer pumps shut off ahead of schedule on October 2

LOUISVILLE, KY– Key downtown streets — that have been closed for a month following a road cave-in resulting from a collapsed sewer pipe — should reopen to limited traffic by October 9.

MSD had previously determined through a laser scan inspection of the pipeline that the planned “slipline” repair – essentially inserting an entirely new pipe inside the older one – can be postponed. That slipline project could have kept the streets closed and disrupted downtown residents and commuters for months.

The August 30 collapse at East Main and Hancock streets was due to a failure of a 102-inch concrete sewer pipe that was installed in 1948. This segment of pipe carries 35 to 40 million gallons of wastewater per day, approximately one-third of the flow generated in Louisville Metro. As such, this piece of infrastructure is vital to the health and environmental safety of the community.

With the use of temporary sewer pumps, MSD established a “pump-around” – essentially a temporary sewer system on top of the roadway – to effectively handle the flow of wastewater previously carried by the damaged pipes. On Monday, September 25, workers were able to enter the section of original pipe from Hancock to Jackson streets and conduct laser scans as part of a thorough investigation of the integrity of the pipeline. The analysis shows that the planned repair to slipline the pipe, which would take more than four months to complete, can be postponed until completion of MSD’s Ohio River Tunnel in 2020.

“With our aging infrastructure, we are constantly assessing the best way to maintain our wastewater management systems in order to protect the health and safety of the community,” said Tony Parrott, MSD Executive Director. “This approach will minimize the disruption that extensive repair work could have on community residents and leverage the long-term plans we already have in place for upgrades to the system.”

MSD’s upcoming tunnel project, expected to begin in 2018, will allow wastewater flow to be diverted around the area of the collapse with much less disruption to the neighbors and businesses in the area, and commuters who depend on this vital corridor. MSD will continue extensive monitoring of the systems in the area and are taking measures to slow the rate of pipe decay until the full repair can take place.

Repairs on the pipe junction structure are ongoing. That work should be completed by Friday, October 6. At that time, the previously installed temporary pumps will be shut off, and area open to limited traffic by October 8. MSD hopes to have the area fully restored to traffic by October 13. 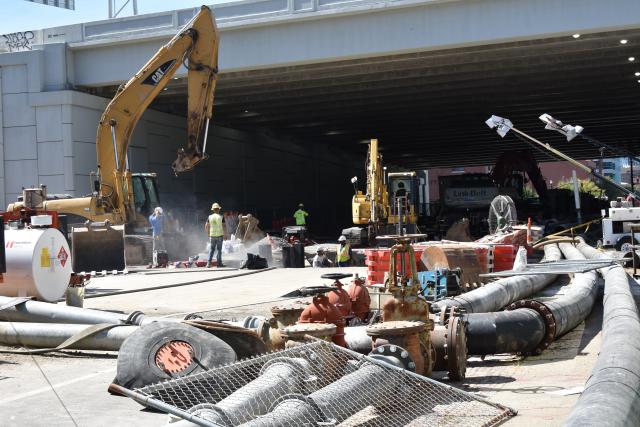 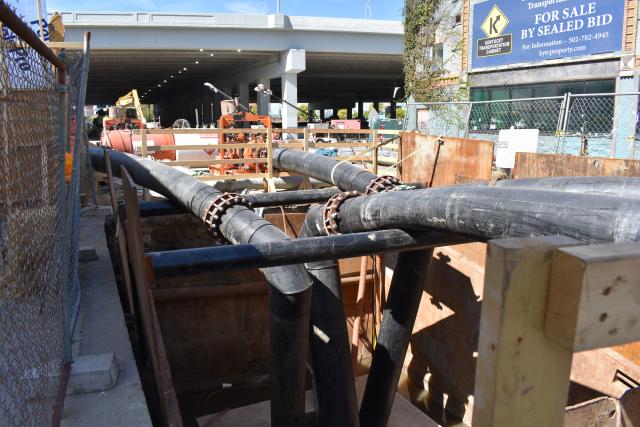 MSD experiences an average of nine cave-ins per month, but this one is exceptional in size and scope. For more information visit: LouisvilleMSD.org/news/downtown-street-cave-repairs