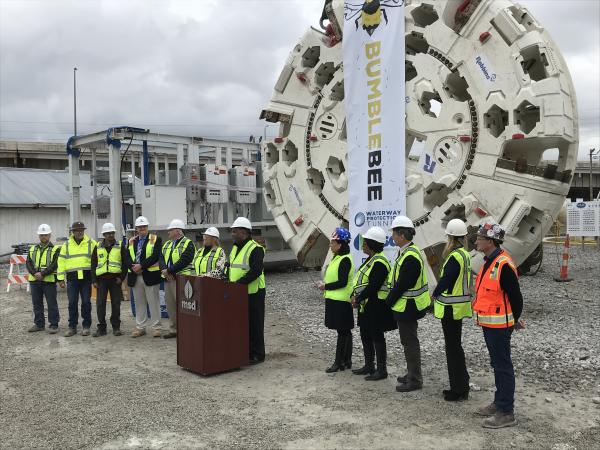 The legacy of Louisville’s own Muhammad Ali continues to live on as the name “Bumblebee” was unveiled for the MSD tunnel boring machine, which will excavate MSD’s Waterway Protection Tunnel underneath Louisville.

The name “Bumblebee” honors Ali’s famous phrase “Float like a butterfly, sting like a bee,” in reference to his fighting style. The name was suggested by MSD Accounting Analyst Mike Fitzner as part of a naming contest and was voted the top choice by MSD employees.

On display at the event was the 22-foot cutterhead proclaiming the machine’s name. The cutterhead mounts on the front end of the boring machine to excavate the four-mile tunnel, 18 stories underground.

“Like the champ Muhammad Ali, the boring machine is also a heavyweight,” said Louisville MSD Executive Director Tony Parrott. The boring machine racks up at an impressive 412 feet in length and weighs 885,000 pounds. The tunnel itself will ultimately have approximately 55 million gallons of storage capacity.

Sexton Smith emphasized the dedication of MSD to the mission of safe, clean waterways and the boring machine as a reflection of that work. “How do we get here? The same way Ali did what he did—with confidence, dedication, giving, respect, and spirituality. That’s how you get the job done.”

Hollander reflected on the positive effects of the project and how it offers minimal surface disruptions. “When I see this machine, I think of clean, safe water,” he said. “Beargrass Creek can be a great asset to this community, and the first step is this machine.”

For Fitzner, his role in naming the boring machine has a more personal touch. Years ago, Ali came to the bank where his mother worked as a teller. As he signed autographs for charity, he ate cookies Fitzner’s mother had baked for the event.

“Ali really enjoyed the cookies and asked to meet the baker. He told her that she was wasting her time working in a bank and should own a bakery,” he said. “Ali gave her the confidence to do just that.”

With the cutterhead now on the scene, it will be lowered down into the working shaft along with other boring machine components which have been arriving on 50-plus tractor trailers for the past month. The machine will be assembled underground and should begin boring by Thanksgiving.