The Morris Forman Water Quality Treatment Center is Kentucky's largest water quality treatment center. The plant is designed to treat 120 MGD dry weather flow and up to 350 MGD wet weather flow. In addition, the plant also handles all of the solids processing for the Regional Wastewater Treatment Facilities in Metro Louisville.

The plant is located at 4522 Algonquin Parkway, in western Louisville along the Ohio River. It is a high purity oxygen activated sludge process facility that produces approximately 70 to 80 tons of biosolids per day that is sold and distributed as Louisville Green.

Although Louisville and Jefferson County’s first underground sewers were built before 1850, at that time there was no wastewater treatment. Sewer lines dumped wastewater directly into the Ohio River, Beargrass Creek, and other area streams until the Morris Forman Water Quality Treatment Center began operation in 1958.

Raw wastewater enters the plant through four mechanically cleaned bar screens with each screen followed by a grit collection system. The screenings and grit removed from the flow are moved on belt conveyors to trucks for hauling to a commercial landfill.

Settled wastewater from the sedimentation tanks flows to the wet well of the Bioroughing Pump Station. A plastic "honeycomb" media in the trickling filter provides sites for bacteria to grow. These bacteria consume some of the organic pollutants in the settled wastewater, reducing organic loads by about 20% as the wastewater trickles down through the honeycomb.

The wastewater flows through a parallel arrangement of five oxygenation trains, each of which contains four successive aeration chambers or stages (Union Carbide Corp. - UNOX Process). Oxygen gas and return sludge are added to the wastewater in the first chamber of each train and this mixture (mixed liquor) flows through the four successive chambers. Blowers and agitators in each chamber will mix the oxygen-enriched gas with the mixed liquor, thus keeping the solids in suspension. Two Vapor Swing Absorption plants produce maximum high purity oxygen gas for the UNOX Process.

The secondary system, consisting of the oxygenation trains and the final settling tanks, is designed to provide rated performance at the design flow of 120 MGD and an increasingly reduced performance up to a flow of 140 MGD. All discharge flow from the primary system in excess of 140 MGD and up to 350 MGD bypass the secondary system and flows directly into the chlorine contact basin.

The chlorine contact basin consists of two flow chambers and may be operated using either the single or dual chambers. The dual chambers provide a minimum contact period of 11 minutes at the peak flow rate of 350 MGD.
Disinfection of the flow is accomplished by injecting a solution of sodium hypochlorite (bleach) into the secondary effluent. Under normal flows, the bleach contact time is 30-45 minutes. Dechlorination is accomplished by the addition of sodium bisulfite prior to discharging the effluent to the Ohio River. 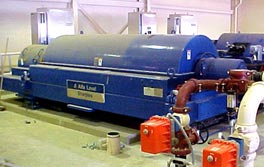 The dewatered material is transferred into four rotary drum dryers. Each dryer can evaporate more than 18,800 lbs of water per hour and are among the largest in use in the United States. The material temperature during the drying process reaches 195 deg F, effectively sterilizing the product. 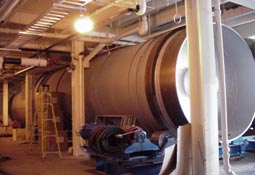 The dryers are fueled with natural gas, or a mixture of digester gas and natural gas, and the heat generated by the dryers is reclaimed to heat the anaerobic digesters.

The dried pellets typically range from 1.5 mm to 3mm in size with 94% to 95% dry solids and a bulk density of about 44 lbs per cubic foot. Finished pellets are temporarily stored in 2 silos with the combined capacity to store about 400 dry tons or just over 5 days worth of average production.

The dried pellets meet the EPA criteria for Exceptional Quality Biosolids. That is, the pellets meet the Class A pathogen reduction requirements, the most stringent metals limits (Pollutant Concentrations), and vector attraction reduction standards specified in 40 CFR 503 regulations. Vectors (flies, rodents, birds, etc.) can transmit diseases directly to humans or play a specific role in the life cycle of a pathogen as a host. Vector attraction reduction refers to processing which makes the biosolids less attractive to vectors thereby reducing the potential for transmitting diseases. Exceptional Quality biosolids products are as safe as other agricultural and horticultural products and may be used without site restrictions.

MSD is implementing an Environmental Management System (EMS) under the National Biosolids Partnership. Learn more about the EMS.

Related Facilities: The elevation of the treatment plant allows the treated wastewater to enter an outfall sewer in the floodwall and to flow by gravity into the Ohio River. When the river elevation exceeds 400.25, it is necessary to pump the final effluent over the levee into the river.

Laboratory Facilities: The treatment plant also maintains a fully staffed on-site laboratory for the daily analysis of process control and compliance samples. The laboratory is also responsible for analysis of industrial and commercial effluents sampled by MSD's Industrial Compliance and Monitoring Department.